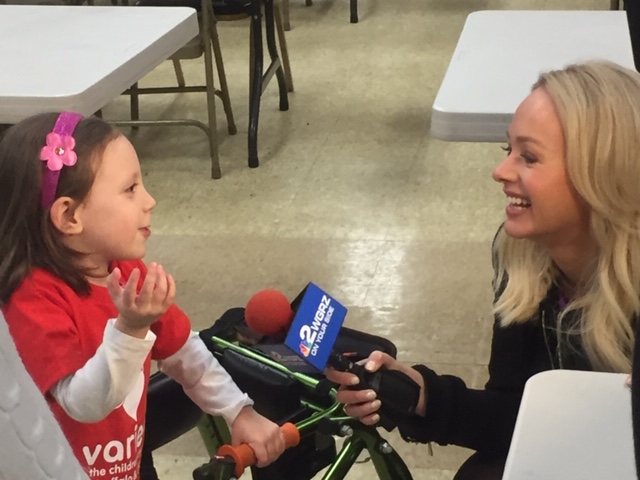 By varietyAdmin March 5, 2020 March 9th, 2020 No Comments
Emilia Fay is like any other four year old.  She loves to run around, laugh and play with her dog Gus and her brother Connor. But on November, 17th 2015, Emmy was born nine weeks early and weighing only three pounds and 4 oz.  She stayed in the NICU at Children’s Hospital for almost two months finally going home on January 4th, 2016 to live with her family in Lancaster.  Ever since, she has been working on getting bigger and stronger with the help of her mom and dad and her doctors.  Early on doctors determined Emmy had gross motor skill delays and when she was three she was diagnosed with cerebral palsy.  That didn’t stop Emmy!  The same year she started preschool in an integrated classroom at the Aspire Learning Center where she is learning new things and made new friends.  She loves school!  Emmy does aquatherapy in the pool once a week and loves any therapy which is fun and makes her happy including horseback riding therapy in the summer.  This helps strengthen her leg and core muscles and helps her with balance when she is still learning to walk.   She just wants to be a happy kid and often times Emmy’s parents struggle with her limitations more than she does.  But seeing how brave and strong Emmy is an inspiration to them and to anyone who meets her.
Emmy is the 2020 Variety Club Telethon Celebrity Child and she is here to help the kids!
Thanks to our friends at WGRZ Channel 2 for the feature on Emmy!
Share Tweet Share Pin
Every Dollar Donated Stays in WNY Give