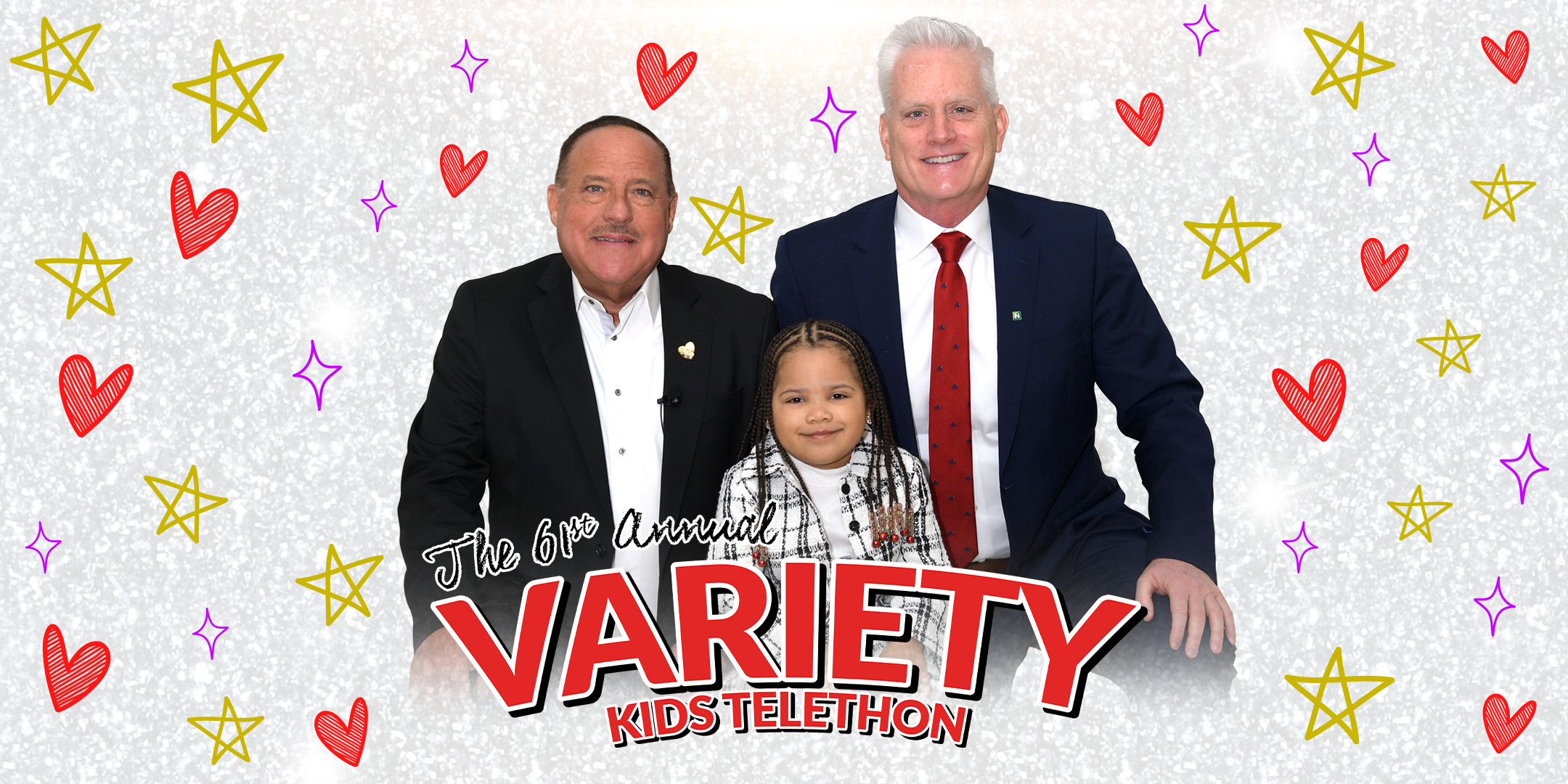 Variety, the children’s charity of Buffalo & WNY is entering its 61st year of The Annual Variety Kids Telethon and we couldn’t be more excited!   Over 60+ years of serving and helping the kids who need us the most and that is all thanks to amazing donors like YOU!  With your continued support we are able to provide our children right here in our hometown with the care they need. 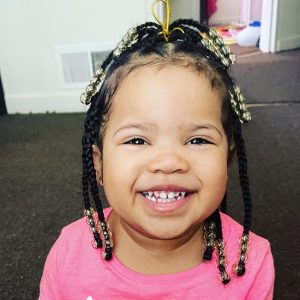 Celebrity Child: Avanyah White
Avanyah Antoinette White was born September 5th 2018, 3lbs 6oz, at 32 weeks gestation at Oishei Children’s Hospital. She lives as an only child with her mother Unique White. It was discovered that Avanyah’s lower extremities were not developing as they should have been at 16 weeks gestation. This is believed by geneticists at Oishei Children’s Hospital to be due to genetics rather than any complications in pregnancy.

At birth, Avanyah was diagnosed with tibial hypoplasia. Her mother made the decision to have her legs amputated at the age of 10 months at Oishei Children’s Hospital.  Unique, Avanyah’s mother was the same age when she had the same procedure.

Avanyah received her first pair of prosthetic limbs at the age of two and began walking very shortly after. Two years later she is now in preschool and thriving!

A very fun fact, Avanyah’s great grandmother Katrina was on the very first Variety Kids Telethon, 61 years ago.   We are blessed to have this amazing family a part of Variety. Read Avanyah’s full story. 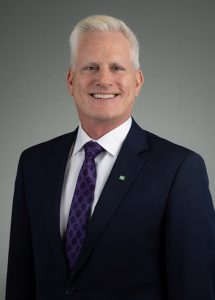 In April of 2018, Rick Hamister was named president of Northwest’s New York Region, an area that includes 35 branches in Erie, Niagara, Chautauqua, Cattaraugus and Monroe counties. Northwest has taken on a more competitive role with other banks in Western New York since acquiring 18 First Niagara branches in 2016.

Mr. Hamister, an Orchard Park native, grew up with his mother being a teller, so he always knew the banking industry was for him. He was hired by First Niagara Bank in 2005, and became part of KeyBank after the conversion in 2016. Before he was named the NY Region President at Northwest, he was a vice president with Key Bank’s private banking. The Canisius College graduate also previously was executive vice president for the Hamister Group, and prior to that he worked for M&T Bank for 10 years.

Mr. Hamister plays an active role in the community as well. He currently serves on the board for the Buffalo Niagara Partnership, Hilbert College, and Orchard Park Country Club. 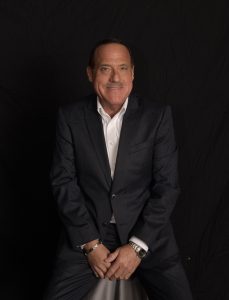 Frank Lignos, a member of the Variety Board, will be the 2023 Variety Kids Telethon Chairman.
Frank is a successful owner/ operator of the ShurFine Eden Market, “Your Market On Main” and has been a member of Variety for many years. 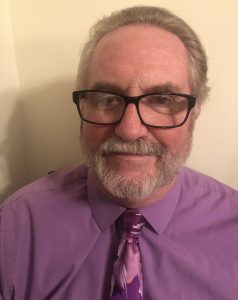 Telethon Co- Chair: Bill Simon
Bill Simon, a member of the Variety Board of Directors currently serving as the Comptroller and  will be the 2023 Variety Kids Telethon Co-Chair. After 48 years of Retail Management he retired and currently delivers Meals on Wheels four days a week. 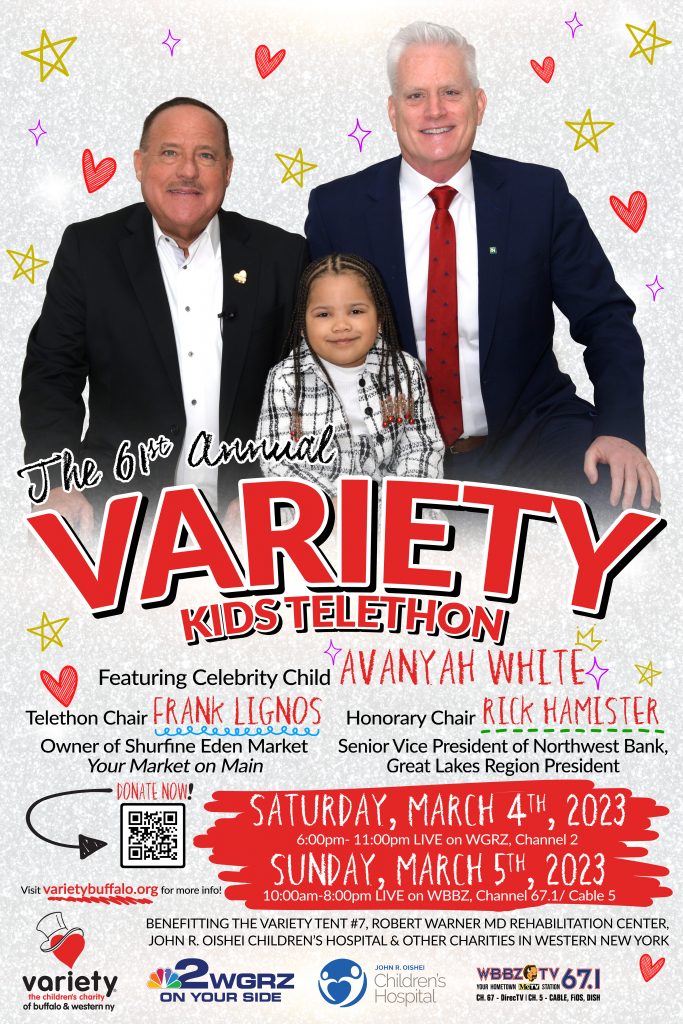 We will be announcing talent and special guests soon.  We can’t wait to celebrate the 61st year and hope you will tune in and help us raise money for our beloved Variety Kids right here in Buffalo and WNY!

Here is a little history about the Telethon:
The Variety Kids Telethon, now in its 61st year, is the nation’s longest-running, locally-produced telethons – and its home is right here in WNY! It all started back in 1962, when Dr. Robert Warner asked Variety to help him fulfill his dream of a rehabilitation center for children with special needs. The first Annual Variety Kids Telethon raised over $80,000, and the Robert Warner Rehabilitation Center for Children with Special Needs became a reality at Women and Children’s Hospital of Buffalo.

Since then, the Telethon has been a WNY treasure, all thanks to the tens of thousands of Western New Yorkers who tune in and pledge their support every year. The Telethon funds dozens of local children’s nonprofits, in addition to the Hospital, and every penny stays right here in WNY. It’s because of this we say “Variety is WNY.” We couldn’t do it without you. Thank you, WNY!