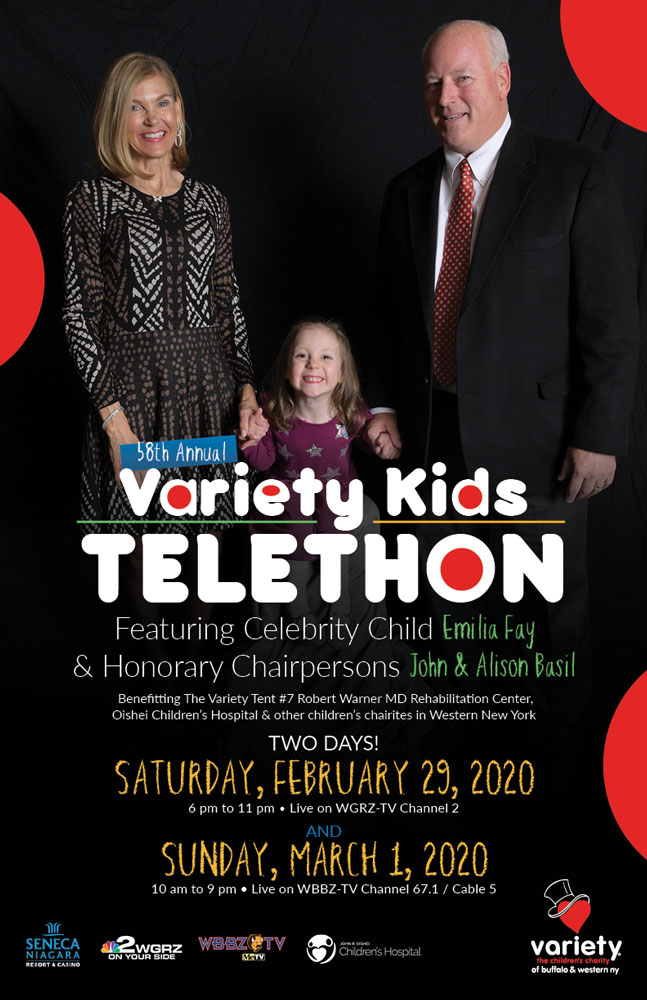 Buffalo, NY – In 1934, a group of Western New Yorkers came together and started a chapter of Variety—the Children’s Charity, becoming Tent #7 in an international organization started with the intent to transform, uplift, and enrich the lives of children living with illness, disability, or disadvantage. The first Telethon in 1962 was prompted by a request from Dr. Robert Warner, who asked the Variety Club for assistance in building a rehabilitation center for children with special needs. Over $80,000 was raised at the first Variety Kids Telethon, and Dr. Warner’s dream became a reality at what was then Women and Children’s Hospital of Buffalo.

Now entering its 58th year, the Variety Kids Telethon has endured because of the support from tens of thousands of Western New Yorkers who tune in and pledge their support each year. Telethon proceeds benefit dozens of local children’s nonprofits right here in Western New York in addition to the Variety Tent #7/Robert Warner MD Rehabilitation Center at the new Oishei Children’s Hospital. Our Variety Kids Telethon holds the distinction of being the longest running locally produced Telethon in the country, and in 2019 raised over $1,000,000.

The 58th Annual Variety Kids Telethon will be broadcast live on Saturday, February 29 on WGRZ, Channel 2 from 6pm- 11pm and continues Sunday, March 1 on WBBZ, Channel 67.1, Cable 5 from 10am-9pm. It will be televised LIVE from the Seneca Niagara Casino Events Center in Niagara Falls, N.Y.

Officers are as follows: 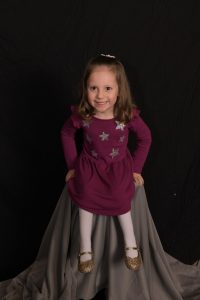 Emilia was born on November 17, 2015. She arrived 9 weeks early, at 31 weeks weighing only 3lbs and 4oz. She stayed in the NICU until January 4, 2016 and since then she has been followed by the Children’s Hospital Robert Warner Center, specifically Dr. Melissa Azaula.

It was identified early on that Emilia had gross motor skill delays and an early Intervention was set up when she was a year old to start planning for her future.

Since then, she has been receiving physical therapy, aquatic therapy and horseback riding therapy. She is learning and growing so much each day. Currently she walks using a posterior walker all day at school and at home.

At age three, she was diagnosed with Cerebral Palsy and began attending Aspire Center for Learning in an integrated preschool classroom. She loves school and making new friends!

Emilia who is affectionately known as Emmy, has a smile that can light up a room. She has a powerful and sweet energy about her and is an absolute pleasure to be around.

She loves princesses and superheroes! This year for Halloween she dressed up as her favorite, Wonder Woman! She loves both pink and purple colors and her princess shoes! Emmy also loves country music. She sings all the time and especially while driving in the car to school and her other activities!

Emmy has come so far in a couple of years since she has begun receiving therapy, she works so hard and is so determined to do things by herself and as independently as possible. 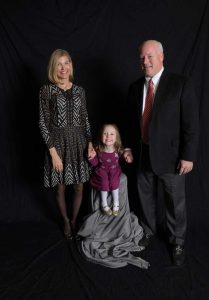 John Basil was born and raised in Western New York. He comes from a very close family and he and his five brothers all followed in their father’s footsteps.

John’s father, Joseph Basil Sr. opened his first dealership in 1967. John started working at the dealership at 14 years old in all different roles.

John and his brothers Joe, Chuck, Mike, Jim and Robert are all a part of the Basil Family Dealerships throughout the Buffalo and WNY Area.

The Basil boys were all taught by their father “givers never take, and takers never give” and that is one thing they all live by. John opened his dealership in 1987.

John and his beautiful wife, Alison married in 1989. They have three children together Will, Lauren and Sean.

The Basil Family is a true staple in the Buffalo and WNY community and a name everyone knows.

We are truly honored to have John and Alison as our 2020 Honorary Chairpersons for the 58th Annual Variety Kids Telethon.

Frank Lignos, a member of the Variety Board, will be the 2020 Variety Kids Telethon Chairman. Frank is a successful owner/ operator of the Eden Shur Fine store and has been a member of Variety for many years. Mr. Lignos is assisted by Telethon Co-Chair Tony Vaccaro.

Tony Vaccaro has been involved with Variety since being elected as a Teamster Officer in 2009, making this his 12th Telethon. Tony was asked to be the Union Co-chair about 5 years ago. He is a board member for the last 3 years and Assistant Comptroller for the last 2 years. 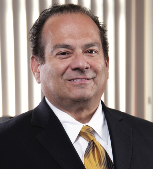 As a current Variety board member and past Chief Barker, Paul Cambria has been a long-time supporter of children’s causes in Western New York. Mr. Cambria is an American criminal defense and appellate attorney who has represented many prominent defendants and is a partner at Buffalo-based law firm Lipsitz Green Scime Cambria. He practices in the areas of Criminal Trials, Appeals, Constitutional Law, First Amendment, Zoning, Antitrust, and Professional Licensing Defense. His practice is nationwide, and he divides his time between the firm’s offices in Buffalo and Los Angeles. Mr. Cambria is a Dunkirk native and a graduate of the State University of New York at Fredonia. 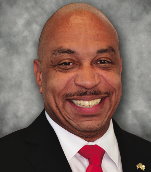 Darius Pridgen serves as Buffalo Common Council President and represents the Ellicott District. He is a long-time Variety supporter, former Variety Kids Telethon Chairmen, and has co-hosted the Telethon for a number of years. Bishop Pridgen serves as the Senior Pastor of True Bethel Baptist Church in the city of Buffalo. Bishop Pridgen is an Air Force Veteran and a graduate of Buffalo State College and Medaille College. 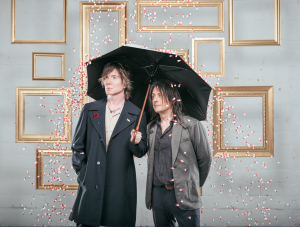 Iconic Rock band, the Goo Goo Dolls will return for the third year in a row! Both, Johnny Rzeznik and Robby Takac are true Buffalo Boys who grew up watching the Variety Kids Telethon! Their dedication and support to the Buffalo music scene speaks for itself. They are currently out on tour in support to their new smash hit album, Miracle Pill. It is a true honor to have their continued support for Variety Club of Buffalo and WNY.
* Please note that talent subject to change

Shawn McQuiller from Kool & The Gang 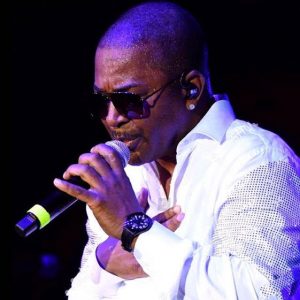 Hailing from Lackawanna, New York, Shawn McQuiller has been on vocals and playing guitar for 28 years as a member of Kool & The Gang. Thanks to iconic songs like Celebration, Cherish, Jungle Boogie, Summer Madness, and Open Sesame, the band has earned two Grammy Awards, seven American Music Awards, 25 Top Ten R&B hits, nine Top Ten Pop hits, and 31 gold and platinum albums. Formed in 1964, Kool & The Gang continues to tour the world, appearing with artists including Kid Rock, Dave Matthews Band, Elton John, and The Roots. Recently, they joined Van Halen for a 50-city tour with rock legends Van Halen. Shawn McQuiller is a member of the Buffalo Music Hall of Fame Class of 2012. 2020 will mark Shawn’s second appearance on the Variety Kids Telethon, which is worth celebrating!
* Please note that talent subject to change 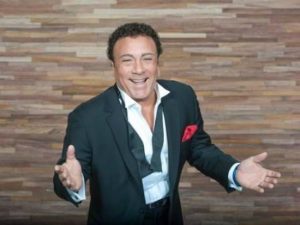 A Variety Kids Telethon staple, Frankie Scinta performed as part of his family group, Buffalo’s first family of music, The Scintas, for over decades. The Scintas brought a unique blend of music, impressions, and comedy together for an unforgettable performance that captivated audiences across the United States—a tradition Frankie has continued. Having headlined shows in Las Vegas for over decades – Frankie is a true entertainer who has dazzled audiences in lounges, theaters, and showrooms across Las Vegas.
* Please note that talent subject to change 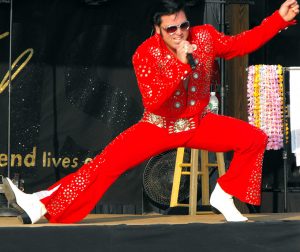 Terry’s dedication to Western New York kids through his support of the WNY kids, including the Variety Kids Telethon, cannot be overstated. A member of the Buffalo Music Hall of Fame Class of 2017, Terry has been performing for over 20 years and is especially known for his dynamic voice and striking resemblance to Elvis. Terry has sold over 50,000 CDs and has opened for national acts such as Diamond Rio, Montgomery Gentry, Rick Springfield, Jim Brickman, Sixpence None the Richer, Johnny Rivers, Grassroots, and the Charlie Daniels Band. Terry is truly Western New York’s premiere Elvis tribute performer. In addition to all of the above, Terry and his wife Aubrey know firsthand how important Oishei Children’s hospital is and what an honor it is to have this incredible establishment in our hometown.
* Please note that talent subject to change 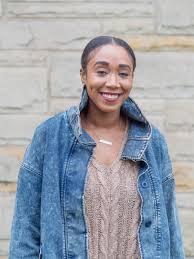 Kimera Lattimore has been singing since she was a little girl. It’s her passion and you can say it’s in her blood. Both of her parents are musically inclined. Her father was in a group called Process and the Doo Rag’s which was based out of Buffalo and produced by Rick James. Kimera graduated from The Buffalo Academy for the Visual and Performing Arts. Kimera teaches music and is a true staple in the Buffalo and WNY area.
* Please note that talent subject to change 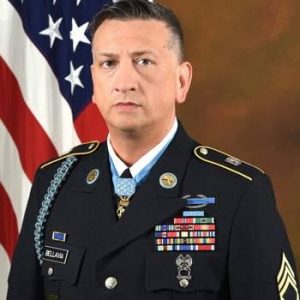 David Bellavia is a former United States Army soldier who was awarded the Medal of Honor for his actions during the Second Battle of Fallujah. Bellavia has also received the Bronze Star Medal, two Army Commendation Medals, two Army Achievement Medals and the New York State Conspicuous Service Cross. In 2005, Bellavia was inducted into the New York Veterans’ Hall of Fame. He has subsequently been involved with politics in Western New York State. On June 25, 2019 he was awarded the Medal of Honor, making him the sole living Medal of Honor recipient from the Iraq War. Mr. Bellavia is also a popular radio host on WBEN. He will be joining the 2020 Variety Kids Telethon for a special tribute.
* Please note that talent subject to change

Featured WNY talent include some of the below acts:

This year the telethon returns to the Seneca Niagara Resort & Casino in Niagara Falls! This world class facility has welcomed artists from across the globe and they once again will welcome the stars of the Variety kids telethon! They continue to be a truly gracious host and we are honored to host our event at their lovely establishment. For more info about the Seneca Niagara Resort & Casino please visit senecaniagaracasino.com!

WGRZ is On Your Side, informing, connecting and advocating for the greater good of Western New York. We strive to make our community a better place to live!
As a local news organization, the basis of 2 On Your Side’s existence, first and foremost is to inform. We deliver the important information our community expects from us. We promise to be there during times of breaking news and breaking weather events.

We are also community advocates. We stand up for the people who live here by holding those in power accountable, asking tough questions and delivering important investigations. We do this in order to get important answers that our audiences demand. We also unite together with our community, so that we can help those who need our help.

Finally, because there are so many great things happening throughout this region, we celebrate our community. We share stories of hope and optimism in order to shine a positive light on this great place that we are proud to call home.

2 On Your Side is proud to be a part of the 58th annual Variety Kids Telethon because this amazing event aligns with our mission and our values of helping those in need and celebrating the amazing things this community offers.

WBBZ-TV is Your Hometown MeTV Station, locally owned by Phil Arno and committed to our hometown. Our award winning team is honored to produce and air the Variety Kids Telethon Sunday March 1st from 10 a.m. until 9p.m. Chris Musial and John Di Sciullo are proud to work with our colleagues
at Channel 2, and Variety, to produce both shows.

Since 1979, the Variety Kids Telethon has donated $25,850,941.40 to the life-changing and life-saving work of Oishei Children’s Hospital!