Touching the lives of millions

Variety – the Children’s Charity of Buffalo & WNY has been serving the needs of WNY’s sick, disabled, and disadvantaged children for over 80 years. As the area’s leading children’s charity, we’re honored to be part of the fabric of this community and to have the public’s trust. That’s why all of our donations stay local and go directly to the equipment and programs that our region’s special kids need most. 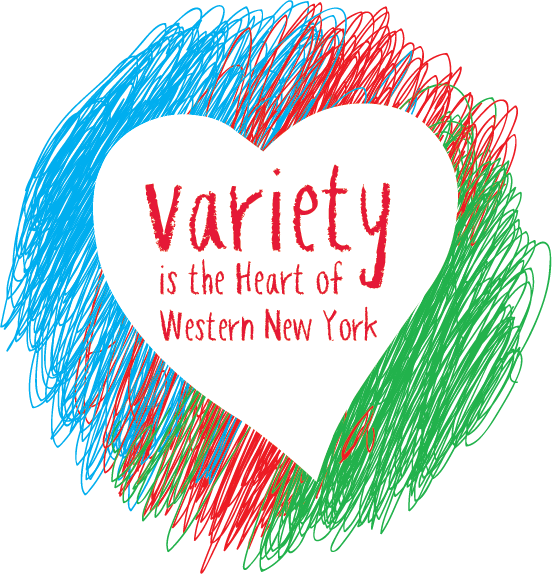 We have touched the lives of millions of children, their families, and the community over the years, and we’re only able to do our work because of the support of the public. In fact, thanks to the tremendous generosity of Western New Yorkers, Variety Buffalo ranks #2 overall among U.S. Variety tents in dollars raised per capita!

Our annual Variety Kids Telethon, the longest-running, locally-produced telethon in the nation, is our flagship event and a real WNY treasure. Each year, the community comes together to rally support for our region’s special kids. Thanks to our supporters and partners, the Telethon raised over $1 million in 2020 for the cause. The 2021 Telethon raised $787,264 for the Variety Club of Buffalo Tent #7, supporting Oishei Children’s Hospital, and other Children’s charities.  We are proud to announce the 2022 Variety Kids Telethon that took place on March 5th and 6th raised $906,060!

Our History – The Variety Story

The roots of Variety are in the entertainment industry – a group of 11 theater owners and showmen founded Variety as a social club in 1927 in Pittsburgh. The Variety Club evolved into a charity a year later after a remarkable turn of events:

Playing cards backstage after a matinee performance at the Sheridan Square Theatre, the group heard whimpering from the auditorium. When they investigated, they discovered a one-month-old baby girl to whom her mother had pinned a desperate note:

Please take care of my baby. Her name is Catherine. I can no longer take care of her. I have eight others. My husband is out of work. She was born on Thanksgiving Day. I have always heard of the goodness of show business people and pray to God that you will look after her.

When all efforts by the police and local newspapers failed to locate the parents, the club members decided that they would act as 11 “Godfathers” and underwrite Catherine’s support and education.

The little girl, who became the inspiration for our international children’s charity, was named Catherine Variety Sheridan, her middle name for the club and last name for the theatre she was found in. Proud that a distraught mother had entrusted her precious child to them, the club members set out to raise money and obtain goods needed for Catherine’s care. The resulting publicity put Catherine’s story and Variety on the front pages of newspapers across the United States. Inspired by Catherine’s story, many other people wanted to get involved and the members were soon inundated with help, far too much for one child, and thus other disadvantaged and orphaned children became beneficiaries of Catherine’s “adoption” by the Variety Club members.

From the inspiration and motivation of a single child, one of the world’s greatest children’s charities developed globally.

Today, Variety – the Children’s Charity has a network of 42 offices in 13 countries, and many millions of individual children around the world, like Catherine, live a better life because of the generosity of Variety’s donors, sponsors and supporters.

Unlike most charitable organizations that focus on a single disease or area of need, Variety focuses on multiple unmet needs of children who are sick, disadvantaged or live with disabilities and other special needs at a local, national and international level. Our aim is to maximize the real, long-term positive social impact for all children. Variety welcomes the support of any person who shares our ideals and objectives. Through Variety,“be the change you wish to see in the world” (Mahatma Gandi)

Local Variety chapters are called tents, and there are 43 tents around the world. As the seventh Variety chapter to open its doors, Variety of Buffalo & WNY is Tent #7. Chartered on May 12, 1934, Tent #7 is one of the oldest Variety tents in the world, and today it ranks as #2 in per-capita dollars raised among all U.S. tents and #6 worldwide.

In keeping with its show biz origins, Variety Club of Buffalo was an oasis for local theater owners and traveling movie distributors long before the Telethon. These characters stopped in to the Variety Clubhouse when it was located on Delaware Avenue in downtown Buffalo to socialize, have dinner, and enjoy after hours cocktails. The Club Steward fixed nightly meals for members and their guests, who stayed to play cards and try their hands on the slot machines after dinner. Proceeds from the Club in those days went to polio victims and children suffering from other handicaps.

As more and more locally-owned theaters closed as national theater chains like Regal and AMC entered the area, Variety Buffalo amended its by-Laws to allow members who were not part of the entertainment industry to join.

In 1962, Dr. Robert Warner approached Variety Buffalo with a dream to create a rehabilitation center for children with birth defects and other afflictions. Variety partnered with Channel 2 and launched the Variety Kids Telethon. The first annual Telethon was a huge success: it raised over $80,000, and the Robert Warner MD Center for Children with Special Needs, a department at Women and Children’s Hospital of Buffalo, became a reality. Variety Club of Buffalo created the Children’s Rehabilitation Foundation as the fundraising arm to channel donations to Oishei Children’s Hospital and other children’s charities, while the Club remained a hub for social activities.

The renamed Variety Tent #7/Robert Warner MD Rehabilitation Center and other departments at John R. Oishei Children’s Hospital remain the primary beneficiaries of Variety Kids Telethon funds, but Variety also provides grants to dozens of smaller children’s nonprofits throughout WNY that depend on Variety to operate. All of the money raised by Variety stays local and goes directly to the programs and equipment that the region’s special kids need most.

Today, Tent #7, one of the oldest Variety tents in the world, has moved its operations to a larger facility at 6114 Broadway in Lancaster, which has a large Banquet facility and a large, paved parking area that allows for year-round functions, Tuesday Night Car Cruises from May-September, and many other fundraisers that benefit the annual Telethon.

The Variety Club Women (VCW), chartered in 1949, is an auxiliary of Tent #7 that focuses on fundraising and providing volunteers to work events. In the early days of Variety, tent members – called Barkers – were exclusively male, so their wives – called Barkerettes – formed a separate group to raise money for the Club. Most of the fundraising in those days was done door to door and through dinner parties.

Today, the VCW is made up of both women and men, and they contribute substantial funds to the Telethon each year.

Join VCW Today!
Every Dollar Donated Stays in WNY Give